With over 230 million active Mastercard users in the US and many more worldwide, trillions of dollars in payments processed a year, and tens of billions in annual revenue, Mastercard is an important part of how people live and spend money. Mastercard and Visa are by far the largest credit card companies in the world, with Mastercard somewhat smaller but still far ahead of its next competitor. This is reflected in sustained, multi-billion profits.

Launched in 1967 by a consortium of California banks including Wells Fargo, Mastercard expanded across the US before acquiring the Swedish / Belgian Eurocard brand in 1968. Operating its international debit card business under the trade name ‘Maestro’, Mastercard grew swiftly and organically and by acquisition became a market leader. Major acquisitions include British fraud risk manager DataCash in 2010 and American artificial intelligence firm Brighterion in 2017. In 2021, Mastercard announced it would support cryptocurrency transactions directly on its network for the first time, adding these to the 150 currencies it already supports.

Mastercard makes money by charging a small fee to the cardholder’s bank to process, clear, and settle payments. International payments are more lucrative than domestic, and Mastercard’s revenues are directly linked to the volume processed. Profits are expected to rise following moves in certain regions towards card payments over cash. Risks to Mastercard’s business model include anti-trust action, as the control of the US market by three companies made all three the target of lawsuits in 2005. These claims were eventually settled out of court for a multi-billion settlement, but some merchants still believe Mastercard, Visa, and American Express operate a pricing cartel and have vowed to continue fighting them in court. 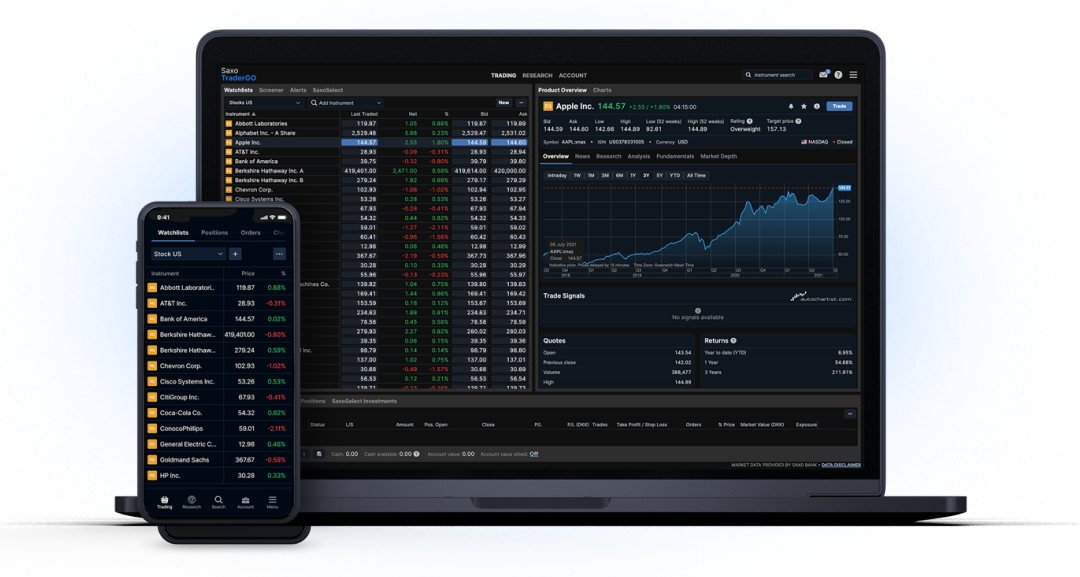 Do you want more information about investing or investing in the Mastercard Inc. stock? Then open an account with Saxo Bank now. You will also receive technical analysis, expert insights, market news and much more.

Get access to clear analyzes and key figures for the Mastercard Inc. stock. At Saxo Bank, you will find expert insights from our own SaxoStrats, view market analysts as well as technical analysis, all gathered in one place.

Before investing in individual stocks, it is recommended to make a thorough analysis. Investing carries risks, your investment can lose value.

*The illustration is used as an example only. For the most up-to-date information on this instrument, existing customers should use the trading platform.

“Market movers” show you the biggest price fluctuations across selected markets. Data is delayed up to 30 minutes. See the full disclaimer for more information.

Invest in popular stocks, in addition to Mastercard Inc.

Invest in popular stocks, in addition to Mastercard Inc.

At Saxo Bank, you can trade over 19,000 stocks. The large selection allows you to find exactly what you need, from niche small-cap options to the well-known large companies with high market caps. See a selection of the most popular stocks you can invest in on our user-friendly platforms, SaxoTraderGO.

Get started investing in stocks

Find your next investment

Are you looking for inspiration? Our SaxoStrats provide daily analysis across asset classes including stocks that can help you identify your next opportunity. If you want to invest in a specific market trend, you can select stocks based on different themes. Use our Stock Screener to filter stocks by sector, market, investment theme and more.
Open an account today and get started

Should our experts invest for you?

Do not have the time, knowledge or energy to make your own investments? So let our independent experts navigate the market and manage your investments for you.
Read more

Find quick answers to your questions about trading Mastercard Inc. at Saxo Bank. We have gathered answers to the questions we most often get from new and existing customers.

In order to buy Mastercard shares, simply log on to one of our platforms - SaxoInvestor, SaxoTraderGO or SaxoTraderPRO - and search for the ticker ‘MA’. If you don’t have an account, you can create one by clicking here.

In order to check the current price of Mastercard shares, log in to your account and search for Mastercard. Then, select trade ticket, click on the ‘I’ icon and then navigate to ‘Trading Rates’ to see transaction costs. New customers of Saxo can click here to open an account now.

On our platforms we offer plenty of different financial information to help you decide if Mastercard is the right investment for you. You will find stock analysis, financial reports, and current and historical price charts on your account. You can open an account here.

Mastercard pays a quarterly dividend to investors. You can find full history and yield data by logging onto your account and searching for Mastercard. If you are not yet registered with Saxo, you can do so here.

You can check how Mastercard shares have performed in the past by logging in to your trading platform account to see price charts and historical financial data. If you don’t have an account with Saxo, you can open one by clicking here.

Information on this page is not intended for investment advice or as an individual recommendation for trading. Reward to the author of this article was / is not related to his / her specific recommendation or views. Although Saxo Bank carefully collects and maintains these pages using reliable sources, Saxo Bank can not guarantee that this information is correct, complete or current. If you use this information without verification, it is at your own expense and risk. No rights can be inferred from the information on these pages. Investment involves risks. Your investment may be worth less. Read more information about the specific product risks on the product pages.